Music theatre composers, lyricists and book writers invited to apply for “Cabaret and Beyond” Festival 2021. Deadline for applications: 6 June.

The Centre for Creative Arts at UKZN announced the launch of the new CAB Festival in 2021: “Cabaret and Beyond”. CAB will be an annual event aimed at bringing together musical theatre creatives from across South Africa. It will promote, develop and commission new compositions and writing within the broad spectrum of musical theatre, cabaret and music-related storytelling.

The organisers recognize the top-heavy local industry and will use this platform to champion new work to empower writers and provide opportunities to showcase material that is socially relevant and retains the entertainment value inherent in the genre; while at the same time engaging in audience development on the festival’s theme of “Cross-wired”.

“Cross-wired provides musical theatre writers with the latitude to experiment with the intersection between genres as well as the several social and identity intersections that can inspire the crafting of their songs. Cross-wired invites a no-holds-barred approach to innovation and creativity”, said Ismail Mahomed, the director of the Centre for Creative Arts.

The Centre has appointed Roland Perold to curate the inaugural CAB Festival. Perold holds a Licentiate in Musical Theatre Performance and an M.Mus in Songwriting from Bath Spa University, UK, and has written and produced four original chamber musicals and has been a strong proponent of new writing development for the genre. He is also a lecturer in the Music Department at The University of KwaZulu-Natal.

“The CAB Festival is open to submissions that are experimental and push the boundaries of the genre, as well as more traditional music theatre works”, said Roland Perold.

Interested persons wanting to participate should complete the online form before 6 June. On 21 June, shortlisted candidates for the inaugural CAB Festival will be announced. Successful applicants will be paid a fee of R2,500 for a song that is selected for a showcase performance during October 2021. If a lyricist and composer wish to work collaboratively, they will receive R1,800 each for each collective work created.

The CAB Festival organisers will provide support and encouragement for the writers during July, August and September. On 12 September, the final song(s) need to be submitted. A Durban based creative team will then stage the CAB Festival Showcase, presenting all the new material, on 16 October during an event presented at the 25th edition of the Poetry Africa festival.

Writers may compose for up to four voices, should they choose. There will be a cast of four; two men and two women. Casting will be finalised by the artistic director after entries have been finalised. A Durban based creative team, consisting of a director and musical director/pianist, yet to be confirmed, will mount the showcase production. Should a writer wish to incorporate elements such as soundscape, or a specific production element, these requirements can be discussed with the creative team.

Following the showcase, two winning composers/writers will be announced whose work shows promise for continued development. Each will receive a grant to develop their ideas into a longer format theatrical production which will be produced in conjunction with the Centre for Creative Arts in April 2022.

Interested parties should complete a form found at the following link: https://forms.gle/5UaAqWa4ftgDcanK9

On the form, you will be asked to provide contact information, a little bit about your interest and/or experience in new musical theatre writing, some examples, via links, to your work should you have any, whether you work alone or with a writing partner and lastly there are some important dates to take note of. A copy of the google form will be e-mailed to your e-mail address when you submit. 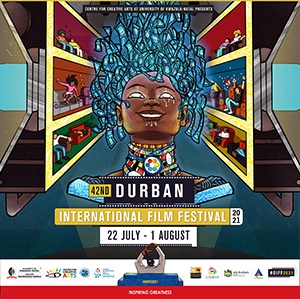 The University of KwaZulu-Natal’s Centre for Creative Arts (CCA) will host the Durban International Festival (DIFF) from 22 July and 1 August 2021. Now celebrating 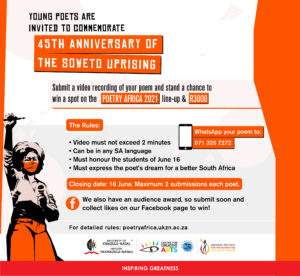 Poetry Africa calls for submissions of poems To commemorate the 45th anniversary of the Soweto Uprising on June 16, the Centre for Creative Arts at the

The University of KwaZulu-Natal’s Centre for Creative Arts (CCA) will host the Durban International Festival (DIFF) from 22 July and 1 August 2021. Now celebrating 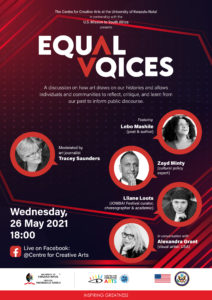 Join the online discussion on how art draws on our histories and allows individuals and communities to reflect, critique, and learn from our past to inform public discourse. Presented by the Centre for Creative Arts at University of Kwazulu-Natal in partnership with the US Mission to South Africa

2021 © University of KwaZulu-Natal: All Rights Reserved.